Spherexx employees might sit behind a desk for their 9-5 but when it comes to vacations, we crave adventure. With a focus on work/life balance we are offered the opportunity to fulfill all of the adventures on our bucket lists. In this series, we will explore all of the travels and adventures of our employees as they take us along for their trip.

This week, I sat down with Collin to learn more about his rugged, ice fishing experience. He headed into the frigid cold of Onamia, Minnesota in hopes of catching fish and having the adventure of a lifetime. Although this community has a population of less than 900 people, it is a premier destination for those seeking the total ice fishing experience.  The most sought-after fish species are typically crappie, panfish, walleye and northern pike. (Minnesota Department of Natural Resources, 2011)

Christina: How far is Onamia, how long did you stay, and describe WHERE does one stay for an Ice Fishing trip?

Collin: We booked our trip in Onamia, Minnesota, which is 800 miles away and we stayed three days. We got to the shanty on Friday afternoon and left on Sunday afternoon. Yes, I said shanty. 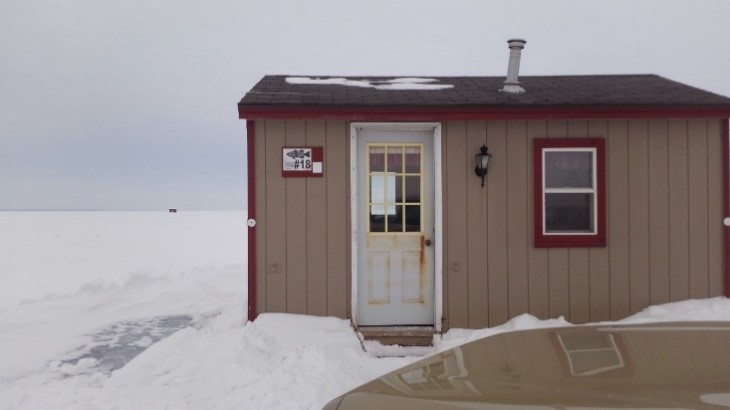 Collin: Sleeping on the top bunk was rough. I had to take the side furthest from our heater because it would be positively frigid on the bottom bunk, but nice and warm on top: but as soon as the heater would kick on, that bunk next to it felt like Satan's door mat. I had to strip down to my shorts and even then, I felt like I was being slow-roasted to perfection. He traveled 800 miles and stayed in a tiny shack in the middle of winter. Some people wouldn’t necessarily consider this a vacation, but for Collin, it was everything he dreamed of doing. Next, he'll get into the nitty gritty details of what the fishing was really like.

Christina: Was this a private lake? Collin: No, it was a public lake, but the shanties were owned by a company called, “K.J.’s Ice Fishing” and they provided everything we would need for our stay.  There were 3 of us and we stayed in a 10x16 bunkhouse that provided 6 fishing holes, a cook stove, oven, and stereo. The “bathroom” was a bucket with a home-made lid and located behind a curtain. Christina: Wow – that is definitely a unique experience!  How many other shacks were there? Collin: In our area, there were only 4 shacks, but there were scattered “Shanty Towns” comprised of anywhere from 10 to 50 shanties lined up in rows all over the lake. There was even a bar on the lake that you could drive to, to catch a buzz if you couldn’t catch any fish. We caught neither. 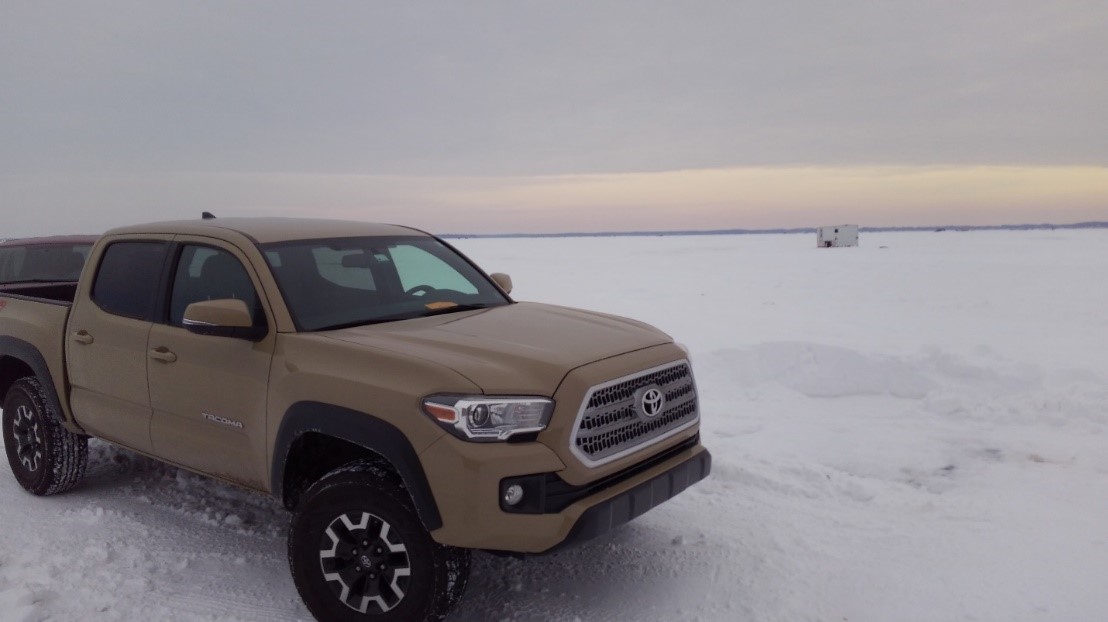 Collin: There's my truck, parked on a lake about a mile and a half from shore.

Sitting in the tiny shack with a bucket for a bathroom and you don't even catch a fish? To me, this ice fishing doesn't seem like all that it's "cracked" up to be.

Christina: What was the most memorable part of your trip? Collin: The adventure. Going some place I'd never been and doing something I'd never done. The most memorable part was sitting down playing cribbage the first night and hearing a sound like someone was dragging a dumpster across the ice. Turns out, that was the ice shifting so I did my best to look calm and collected though I was screaming in terror on the inside while my friend sat in silent horror as I looked up on google, "When should I be concerned when ice fishing?" 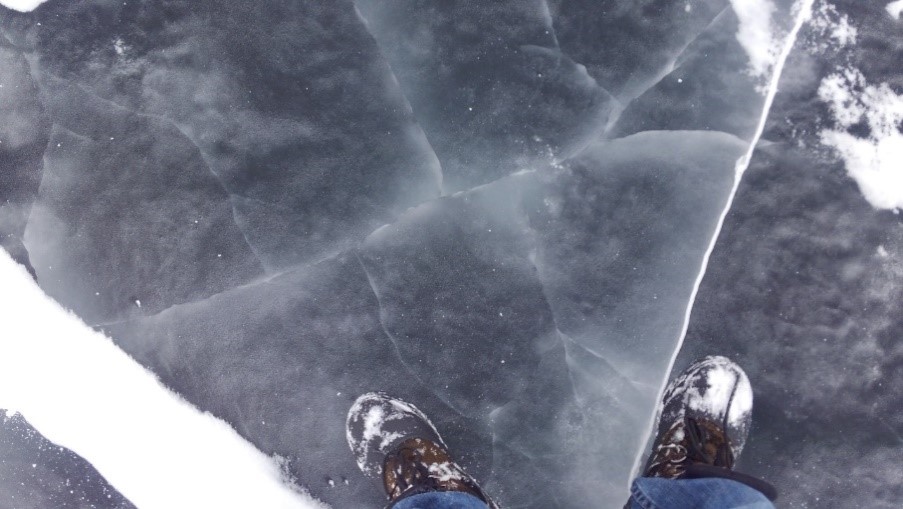 Collin: There are my feet, standing on 3.5 feet of ice.

While Collin considers the sitting in silent terror his most memorable part of the trip, I was worried to know what would be the worst part about going ice fishing...

Christina: If that was the best part...what was the worst part of your trip? Collin: The bucket...So there was no true bathroom out there; only a side room in the shanty with a 5-gallon bucket, lined with a trash bag, positioned (sometimes more accurately than others) under a wooden bench with a toilet seat nailed to the top. As long as you pretended like modern sanitation hadn’t yet been invented and put yourself in a medieval mindset it was just like downtown.

As you can see, Collin is very easy going and is always up for an adventure and everything that it entails. He's a lot more relaxed about these situations than I would be, that's for sure.

Christina: Will you go again?

Collin: Absolutely. I owe those fish for the shameless mockery they made of my fishing prowess. Christina: What is one item you wish you would have brought with you? Collin: Hmmm...A depth finder, underwater camera, dynamite...anything that would have given me an edge. 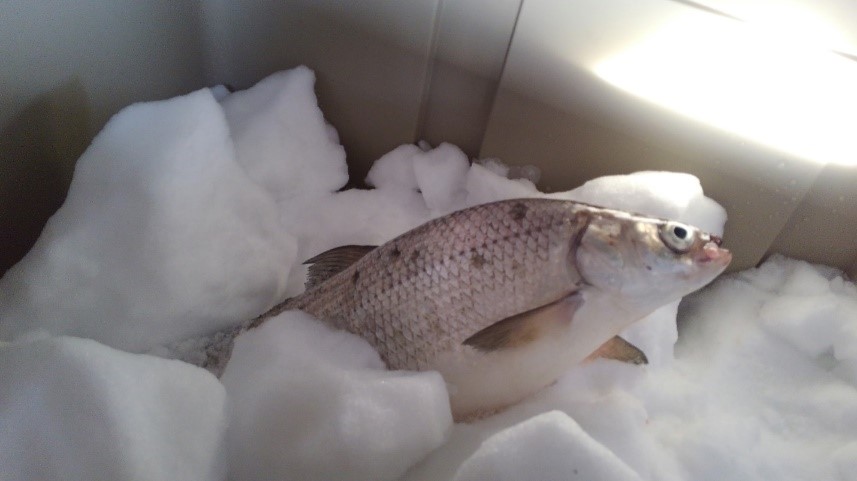 Collin: There's the one lousy fish that was just crazy enough to bite the hook. The majority of the trip was spent playing cribbage, Clue, and Empire Builder. The fishing poles were just for show.

Christina: So what does one do after ice fishing?

Collin: Well, I joked about going lobster fishing in Maine, but I might do the salmon run in Montana. Of course, woodland creatures scare me so I might be armed to the teeth on the Montana trip. I can deal with chipmunks, but it's really raccoons, coyotes, foxes, bears, wolves, moose, surly deer, mountain lions that I would be up against.

As you can see, Collin doesn't shy away from adventure. In addition to his integral role here at Spherexx, Collin is a connoisseur of many hobbies. In his spare time he fishes, hunts, paints, and is a crochet master!

Check our blog soon to see what woodland creatures Collin wrangles on his next trip!